Under the Mercy Trees 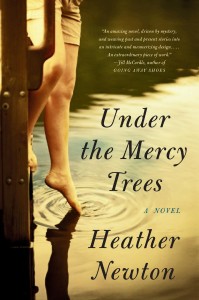 Newton delivers a stirring debut novel told from the perspectives of four central characters embroiled in a family drama that spans generations and is riddled with defensive secrecy and emotional penury in equal measure. After the disappearance of Leon Owenby, his younger brother and central narrator, Martin, returns to the family's Willoby County, N.C., mountain town from his life as a destitute writer in New York City to aid in the search for Leon and support his other siblings. The year is 1986; Martin leaves behind his ex-lover, Dennis, and their many friends sick and dying from AIDS. Back home, he must face his painful past, his extended family to whom he is closeted, and his high school girlfriend (who still carries a torch for him). Many months of searching reveal more about the searchers than about Leon; the secrets and resentments in the Owenby family run deep and bubble to the surface unexpectedly. It's problematic that with so many family issues coming to light, Martin's sexuality is ignored and remains a secret, but Newton's use of multiple viewpoints and distinct voices is adept and lively, and helps to fill in the thin premise of Leon's disappearance. With many novels of this construction, a reader tends to favor one voice over the rest. Not so here; Newton delivers across the board with these characters, who run the gamut from perky to depressive, desperate to schizophrenic. (Jan.) (c) (c) Copyright PWxyz, LLC. All rights reserved.

*Starred Review* A melancholy mood suffuses Newton’s nimble debut about a middle-aged man who returns, reluctantly, to his rural North Carolina hometown. Martin Owenby might have never again set foot in Willoby County if it weren’t for the disappearance of his ornery brother, Leon. Now he finds himself in the company of the same damaged souls he fled decades before. Among them: his sister Ivy, who hears voices and sees ghosts; sister Eugenia, who isn’t happy unless she’s causing someone grief; and sister-in-law Bertie, who’s lumbering through a loveless marriage and lackluster life. Martin, who kept his homosexuality a secret throughout his upbringing (and only became openly gay when he entered the University of North Carolina, Chapel Hill), also reconnects with his high-school sweetheart, Liza, now married with a handsome husband and children of her own. As time passes, family and friends begin to lose hope that Leon is alive. In his eloquent, sorrowful novel, short-story writer Newton gradually reveals dark (and occasionally scandalous) secrets about each member of the Owenby clan, including Leon, who may have had good reason to disappear. Readers of both Pat Conroy, on one hand, and Carson McCullers, on the other, will relish Newton’s flawed characters and piquant portrayal of small-town life. --Allison Block
More Reviews

“Told from these four characters’ points of view, this first novel builds nicely toward many revelations and resolutions. Newton is skilled at revealing a world of hurt, and fans of family dramas will appreciate it.” — Library Journal

“A novel that seamlessly, beautifully, twines past with present to show how we can never escape our histories or the deeds—good and bad—that create those histories. The powerful, swelling conclusion of this book raised gooseflesh on my arms and had me near tears. ” — Tom Franklin, New York Times bestselling author of Crooked Letter, Crooked Letter

“Under The Mercy Trees will take your breath away.... A remarkable debut by a writer who captures with her words the beauty in the ugly and forgiveness in the unrepentant.” — Robin Antalek, author of The Summer We Fell Apart

“Under the Mercy Trees is an amazing novel, driven by mystery, and weaving past and present stories into an intricate and mesmerizing design.... An extraordinary piece of work.” — Jill McCorkle, author of Going Away Shoes

“A brilliantly crafted novel of a complex family bound by love and hate, hope and regret, a family that must come to terms with each other and in the process, forgive themselves. You’ll find a bit of your own family there and perhaps something of yourself.” — Sandra Dallas, author of Whiter Than Snow and Prayers for Sale

“Under the Mercy Trees offers eloquent evidence that nothing is or ever will be as dramatic as family.... [A] stunningly beautiful book…. Newton has rendered her characters’ world with clear-eyed compassion and in so doing delivered one sweet ache of a novel.” — Tommy Hays, author of The Pleasure Was Mine

Listen to the Pullen Memorial Baptist Church choir sing the song that inspired the title, Hugh Stowell's From Every Stormy Wind That Blows:

Previous Post: Legal Lessons for North Carolina Teachers
Next Post: The Case Against Compartmentalization in Creating Your Writing Life