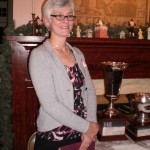 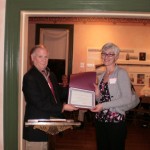 On December 6, 2011 I was honored to accept the Thomas Wolfe Memorial Literary Award for Under The Mercy Trees.  The Western North Carolina Historical Society has given the award for literary excellence every year since 1955.  The list of past winners inscribed on the award's trophy includes such North Carolina greats as Wilma Dykeman, John Ehle, Gail Godwin, Kathryn Stripling Byer, Charles Frazier, Tommy Hays, Lee Smith, Ron Rash and Wayne Caldwell.  I am deeply touched to have my name added to the list and to have custody of the trophy for the next year--it looks quite lovely on the shelf here in my law office!  My heartfelt thanks to the WNC Historical Society for this affirmation of my work.

Previous Post: Under The Mercy Trees is a "Great Group Reads" Pick
Next Post: Vote AGAINST Amendment One