Where Did the Idea for Under The Mercy Trees Come From?

So many experiences, observations and inventions converge to make a novel. Here are some of the seeds that formed Under The Mercy Trees.

In the novel, the oldest brother in a western North Carolina family goes missing, forcing his estranged younger brother to return home and face his past. The idea for the brother’s disappearance came from a loss my husband’s family suffered. His uncle disappeared, and by the time his body was found several years later, the cause of death couldn’t be determined. The lack of closure was devastating for the family. Against that background I created characters to explore the thing I like most to write about–human regret. When I began the novel I was still a young woman, and the type of regret that interested me most was unrequited love. The novel took several years to write and by the end I was more interested in other types of regret that burden people in middle age: squandered potential, broken relationships, disappointing choices by adult children, words spoken or left unspoken. 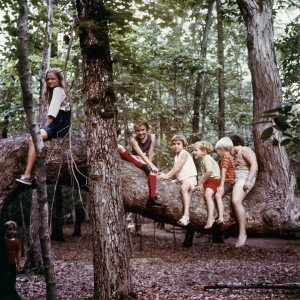 Under The Mercy Trees features a grove of storm-bent trees that grow “bent in the shapes of chairs, up, then sideways, then up again, a dozen giant church ladies sitting down.” When I was a kid in Piedmont North Carolina in the 1970s, the woods were full of trees that had been ravaged by Hurricane Hazel in 1954 and had matured twisted and contorted into odd shapes. There was also a particular tree at Morrow Mountain State Park in Stanley County where my family sometimes rented a cabin in the summer. The tree was huge, and grew at a complete right angle over the trail. I’ve included a photo of it here. That’s me in the middle with the bad haircut, wearing the white sandals, with my siblings and cousins. We thought that tree was magic.

The oldest bit of writing that made it into the novel came from a short story I wrote in 1989 called “Snow Day.” The (only) good part of the story, a scene in the snow on the campus of UNC Chapel Hill, appears in the novel. The original story involved a heterosexual love triangle among a young woman and two young men. In the novel, the scene is between two men.

In the novel, one character, Ivy, saves up money to buy a headstone for her son’s grave. When she goes to the monument company to order it, the yard is full of “a big pile of mistakes, leftover granite scraps with one side smooth and the other rough, some with one letter carved in them. It makes you wonder whose name they’d been trying to spell when the chisel slipped.” When I was a kid my dad used to get blocks of discarded granite from the local headstone factory and put them around our yard for landscaping. Some had letters carved in them, which was kind of creepy, but good material for future fiction.